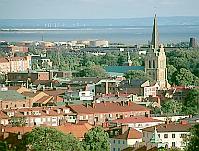 I am from Sweden, Halmstad to be more precise, not too far south of Gothenburg. I lived there until July 2005 when I moved to Michigan, USA where I have been living since.

I must say your article made my stomach turn. I can easily discard what many bloggers responded to your article with, as I have seen a lot of what you wrote with my own eyes. I am 20 years old and even I can say that when I was younger Sweden was a better place, the last 10 years have brought a new wave of “civilization” there.

Posing with a Swedish flag, singing the National Anthem or discussing immigration is labeled as “racism”, not only by immigrants, but by the Swedish media as well. Aftonbladet is probably the Swedish biggest newspaper, and not too long ago they presented pictures of people involved with nationalistic parties, including their home address, phone number and other information. Yet when 5 Arabic boys between 16 and 21 raped a 14 year old girl, they showed only blackened profile pictures and no other information, not even a first name.

I can say I have really seen the negative impact of the immigration. The USA may have a lot of immigrants but the US Government does not play sissy games as Sweden does. The immigrants in Sweden take full advantage of what they can, and no one says it’s enough, that when you move to a country, you have to adapt to it. I am not saying to disband your culture or beliefs, not at all, but enforcing it and disregarding the culture of the citizens of the actual country you come to is beyond disrepectful.